“It is the best excavator I have ever owned.” Olav Haldor Mykland

Olav Haldor Mykland who owns Mykland Maskin AS based in Gjerstad on the Skagerrak peninsula has been running his own business since 1997.  He runs two other excavators alongside his new Kobelco SK300LC-11, both from other manufacturers, with his SK300LC being the first from the Kobelco brand. “I have operated Kobelcos in the past and found them to be a very well-built machine,” Olav commented. “When the time came to add a new machine to my small fleet, my first choice was always going to be Kobelco.”

Olav is involved in a variety of projects from operated hire for large national contractors to undertaking his own work around the region including housing development, drainage works, utility installation, and heavy landscaping works.

One of the first jobs for the new SK300LC-11 was on a new development of holiday chalets in the holiday region of Sildevika where Olav was dealing with the construction of the foundations for several new homes on the development as well as the installation of services and the construction of new, natural stone retaining walls. “As we are working on hard rock, I needed an excavator capable of dealing with the heavy digging in this region,” said Olav. “We drill and blast the rock before we create a level platform for the chalets to be constructed off. Once the area is level, I can install the drainage and service pipework before the builder comes to pour the concrete slab foundation.”

Olav’s project at Sildevika involved a variety of work including the excavation of heavy rock to allow the concrete bases of the chalets to be constructed. “The digging conditions are hard here and will test any machine on the market,” Olav explained. “But, my Kobelco deals with it easily. I am very rarely taking the machine out of the ECO mode as there is always plenty of power available.”

Olav’s new Kobelco has been supplied with a range of additions to make his operations more straightforward. A Rototilt R8 tilt rotator, Loadex100 weighing system, and a Moba 3D machine control system. “I would not be able to do my job as quickly, as effectively and as productively without the addition of these systems,” Olav confirmed.

The construction of natural stone walls is also another feature of Olav’s operations on-site and whilst lifting power is required to handle the large blocks of heavy granite, Olav needs the precision available from the Kobelco to accurately position each block in its place. “There are no surprises with the hydraulics on the Kobelco,” he continues. “They are smooth and accurate, exactly what I need.” Using his Rototilt to place each block into position Olav steadily constructs the wall before quickly swapping back to his bucket and backfilling behind the structure.

The SK300LC-11 is one of the latest generation of Kobelco excavators manufactured at the Itsukaichi facility in Japan and has been supplied by local dealer Entrack AS. Entrack has been one of two dealers for Norway for almost a decade, and in that time, has experienced considerable success with the brand.

The SK300LC-11 benefits from a clean and uncluttered upper structure with easy access to all of the machine’s main components available from ground level and access to the engine via safe, non-slip steps to the large, gas-strut assisted engine cover. Behind a pair of wide-opening doors to the rear of the cabin is the excavator’s swing-out radiators and battery compartment while the opposite side of the machine has a large, single door covering the hydraulic pump and remote fuel and oil filters.

As with all Kobelco excavators, the SK300-11 has been designed to allow ease of access to all components to reduce maintenance time and cost. Low maintenance and low fuel consumption is a must for owner-operators like Olav and the Kobelco meets these requirements precisely thanks to its 6-cylinder Hino engine. Delivering 200kW, peak torque from the engine arrives at just 1600rpm allowing Olav to save money on fuel whilst the excavator still delivers class-leading performance.

Working up to 12 hours per day in the excavator, Olav believes the comfort and layout of the -11 cabin is one of the best available. “The Grammer seat is comfortable and has enough movement for me to get in the right seating position. There is a huge amount of space in the cabin too with a good-sized storage area behind my seat. The controls are well laid out and easy to use and even with the fitment of the Novatron X-site 3D and Loadex screens, the view to the front is excellent.”

Inside the cabin, Kobelco has fitted a new 250mm touchscreen designed to allow easier and quicker access to the settings within. The easy-to-read symbols can be selected by a rotary dial on the machine’s dashboard which enables Olav to choose pre-set attachment profiles stored within the system at the touch of a button. “Everything about the cab is made to make my life easier,” Olav explained. “The layout of the switches, the precise feedback from the joysticks, the vision from my seat, and the lack of noise coming into the cabin make it a very nice machine to spend the day in.”

“I am very satisfied with the Kobelco and the service I am getting from Entrack,” Olav said. “The excavator has been extremely reliable from the moment it arrived with me, and I have been very pleased with its low fuel consumption too.

“Having a dealer like Entrack looking after the machine also gives me peace of mind as I know that they are always at the end of the phone should I have any issues. This is the type of service anyone in this business requires.” 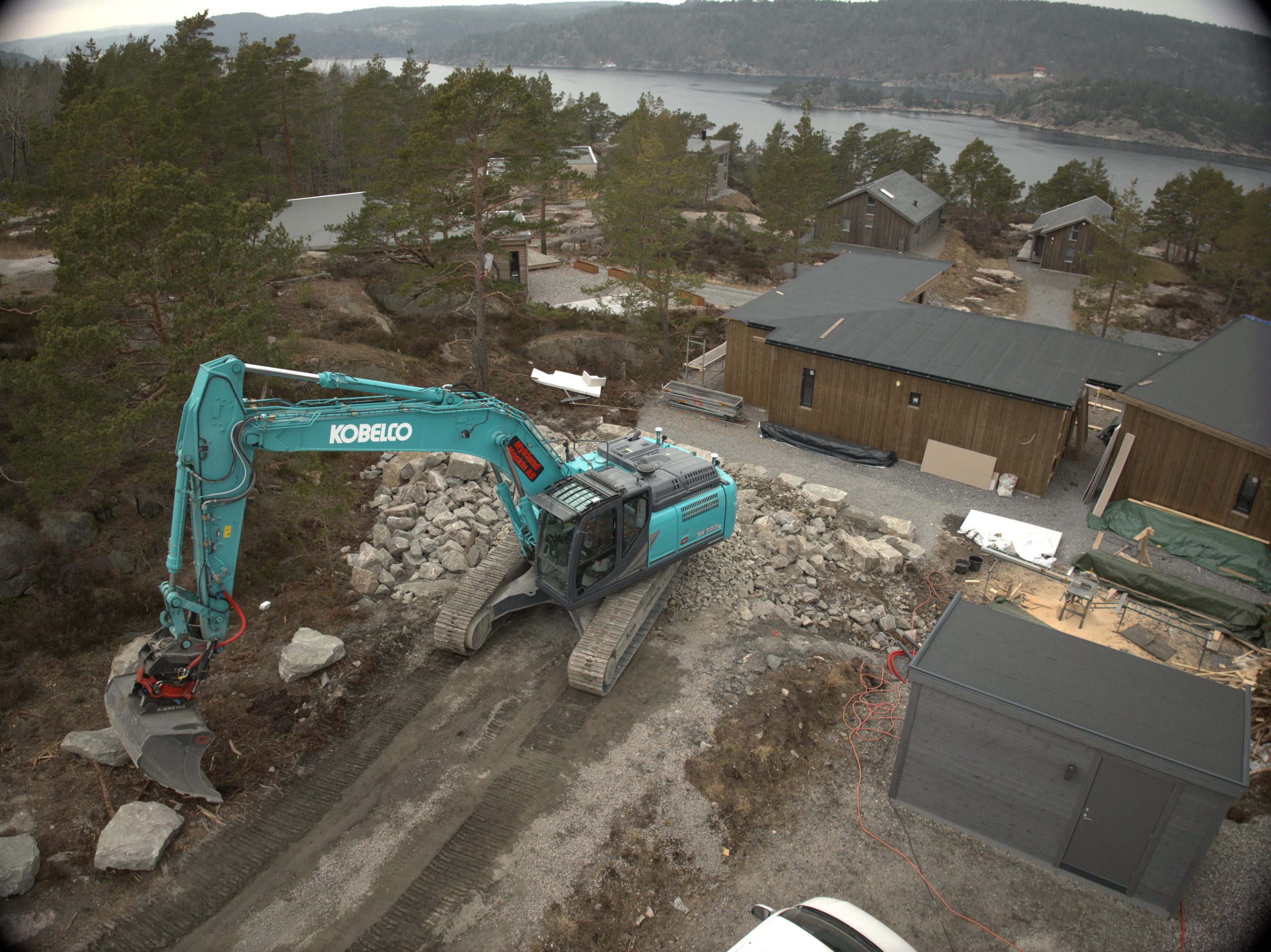 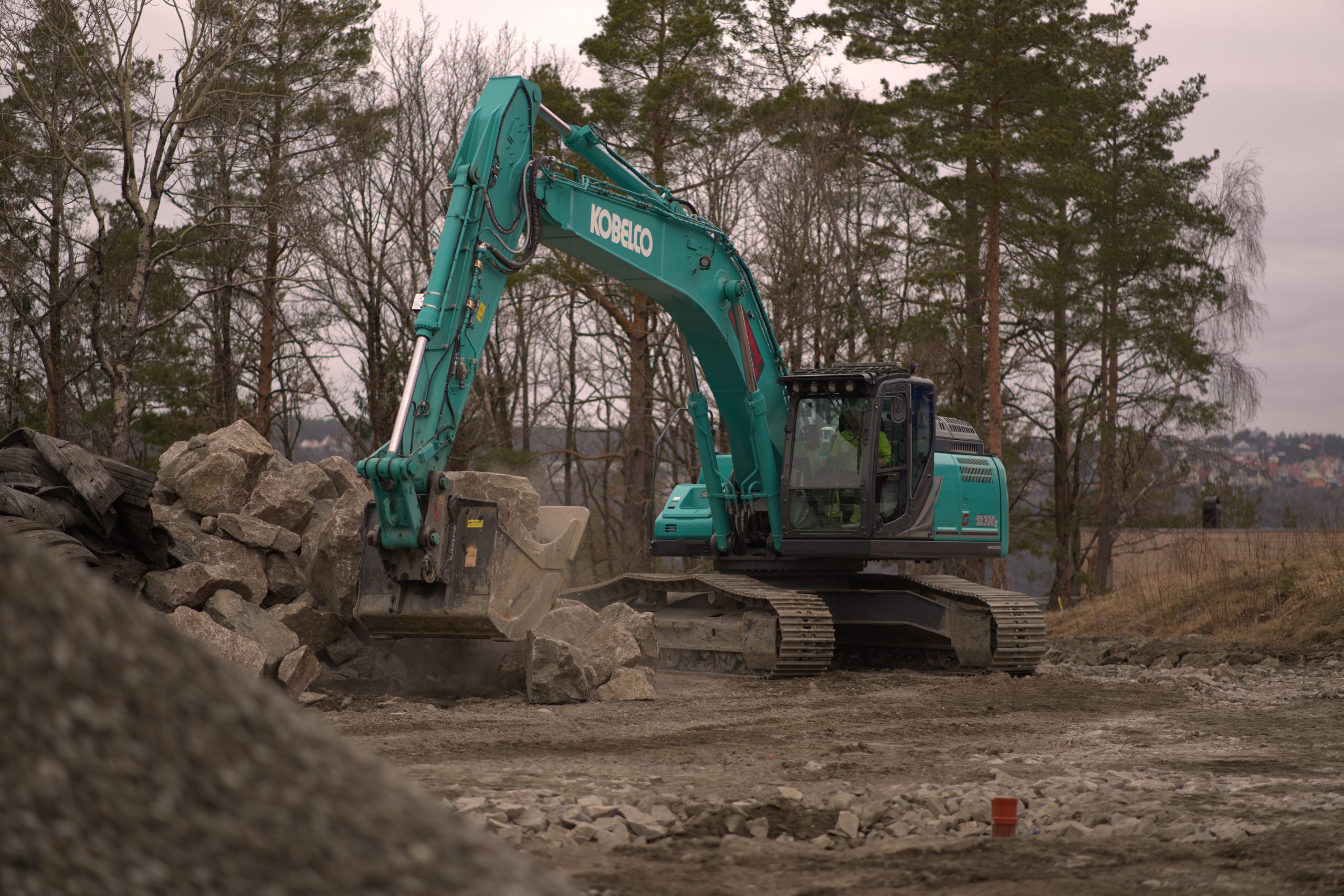 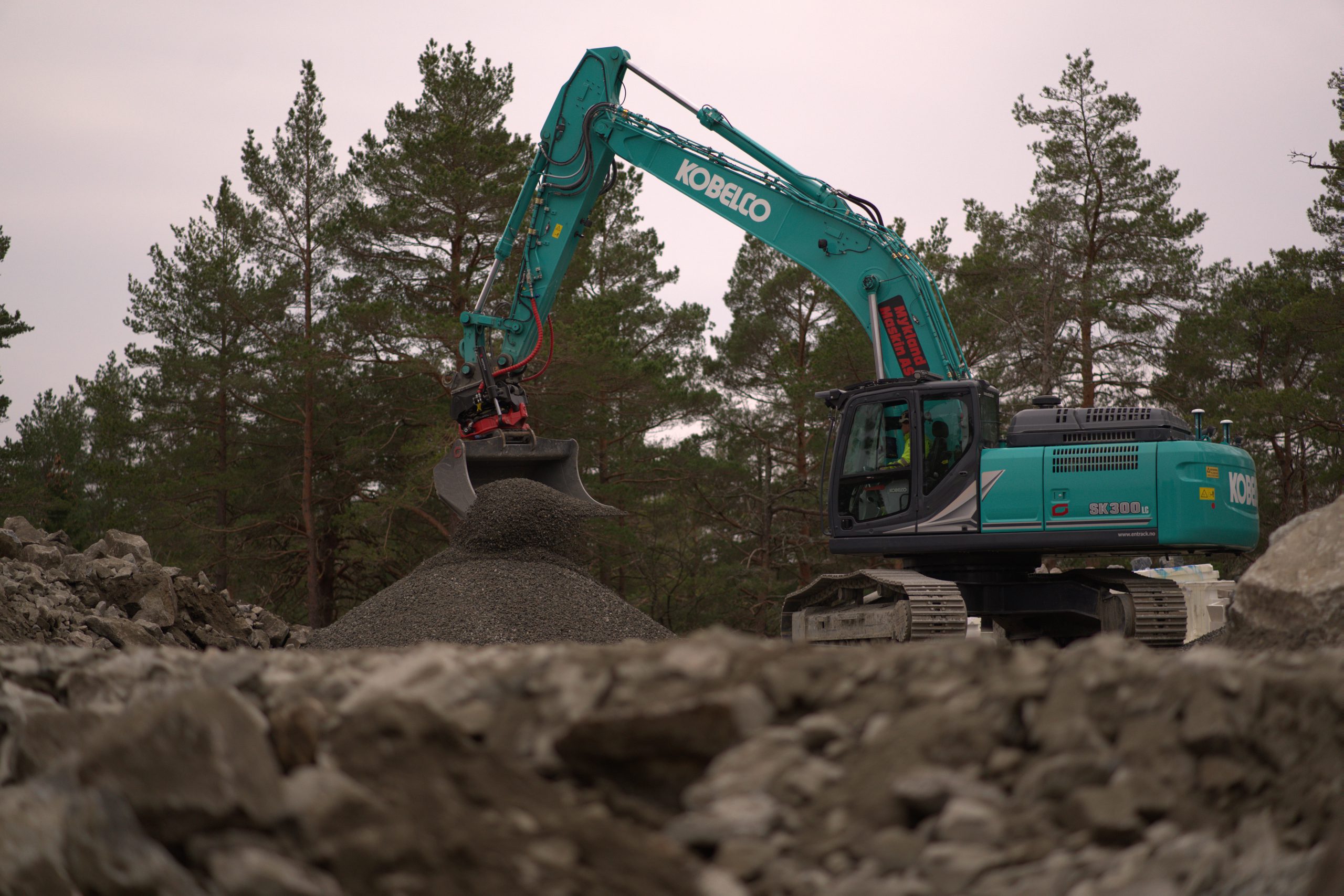 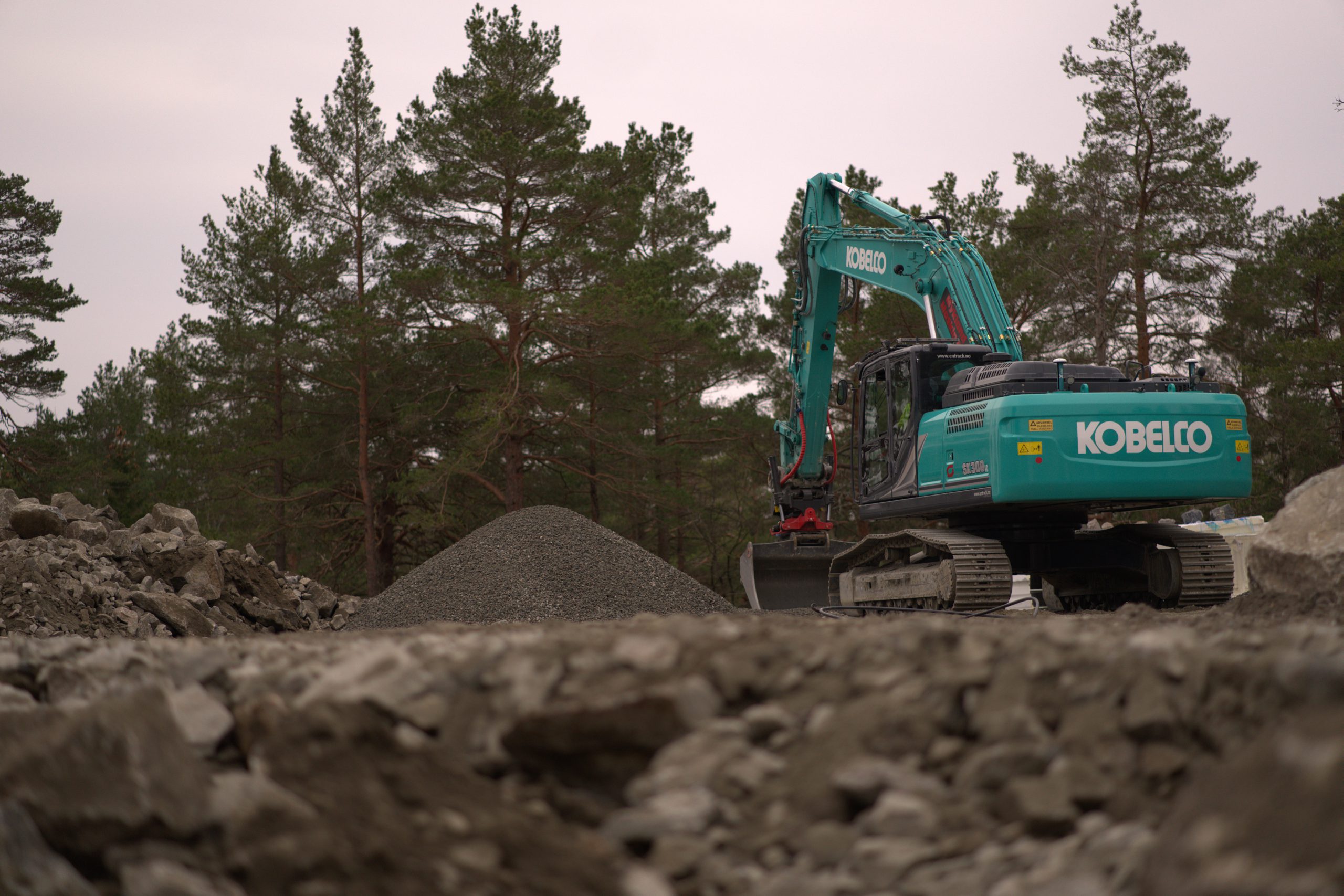 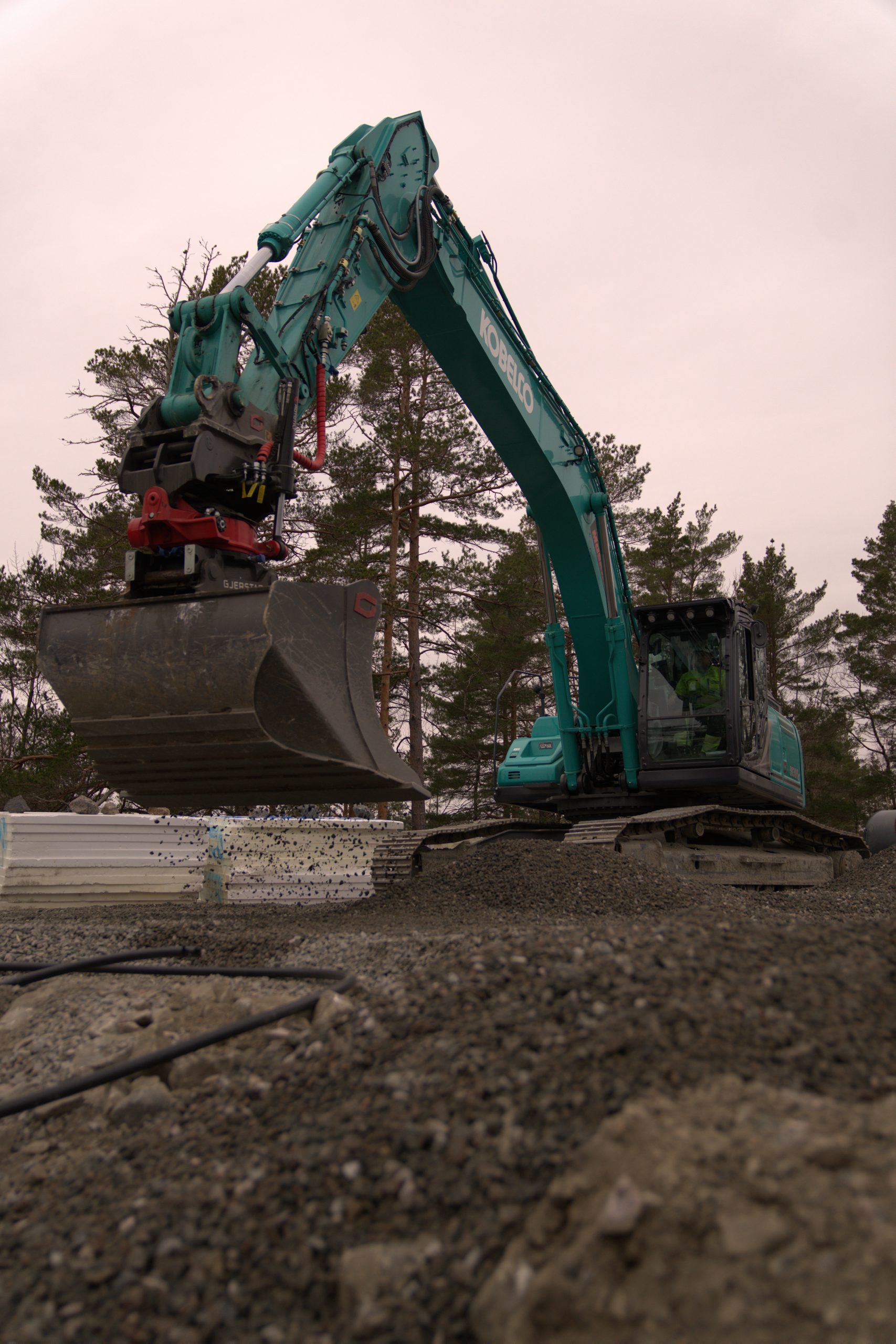 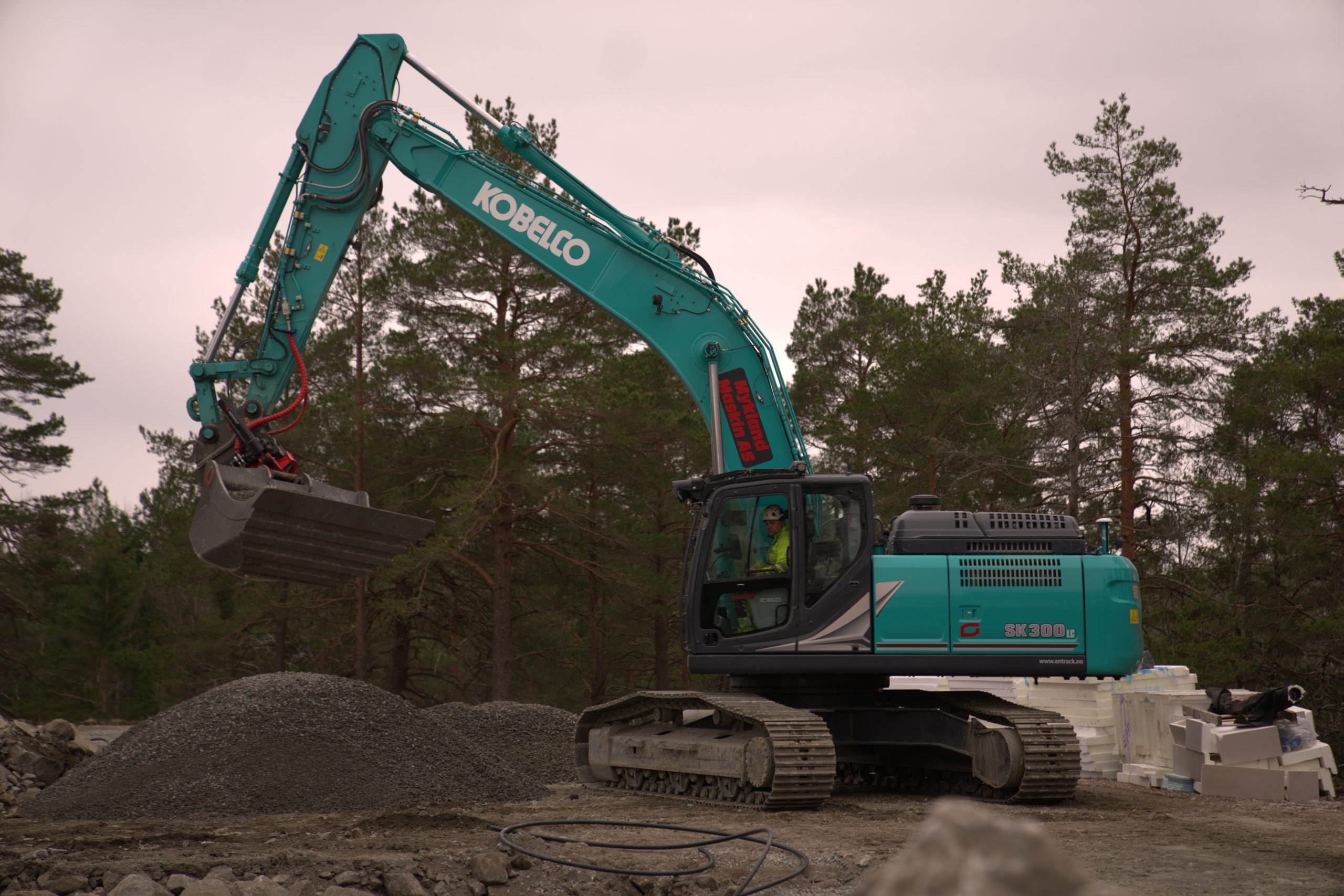 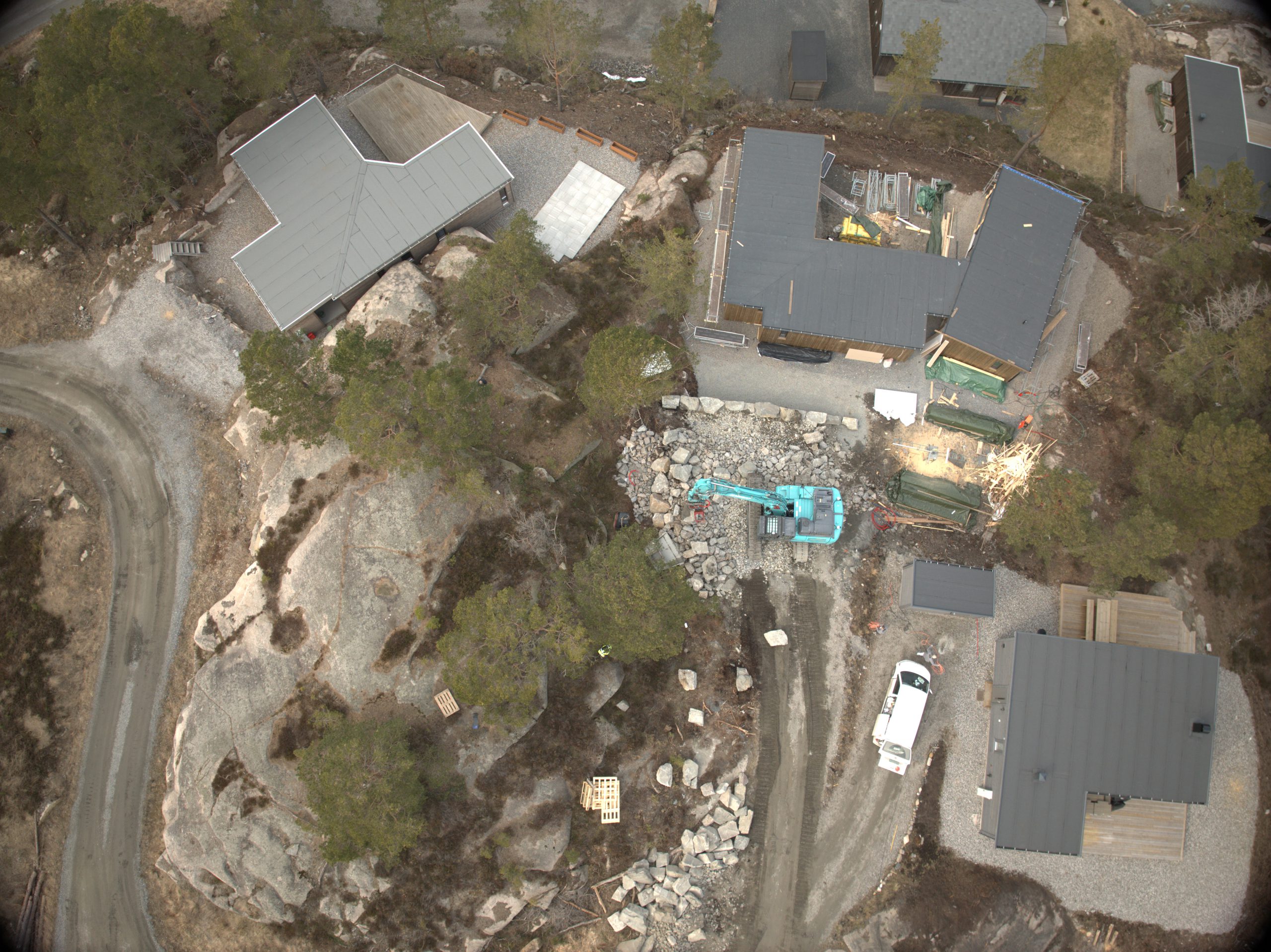 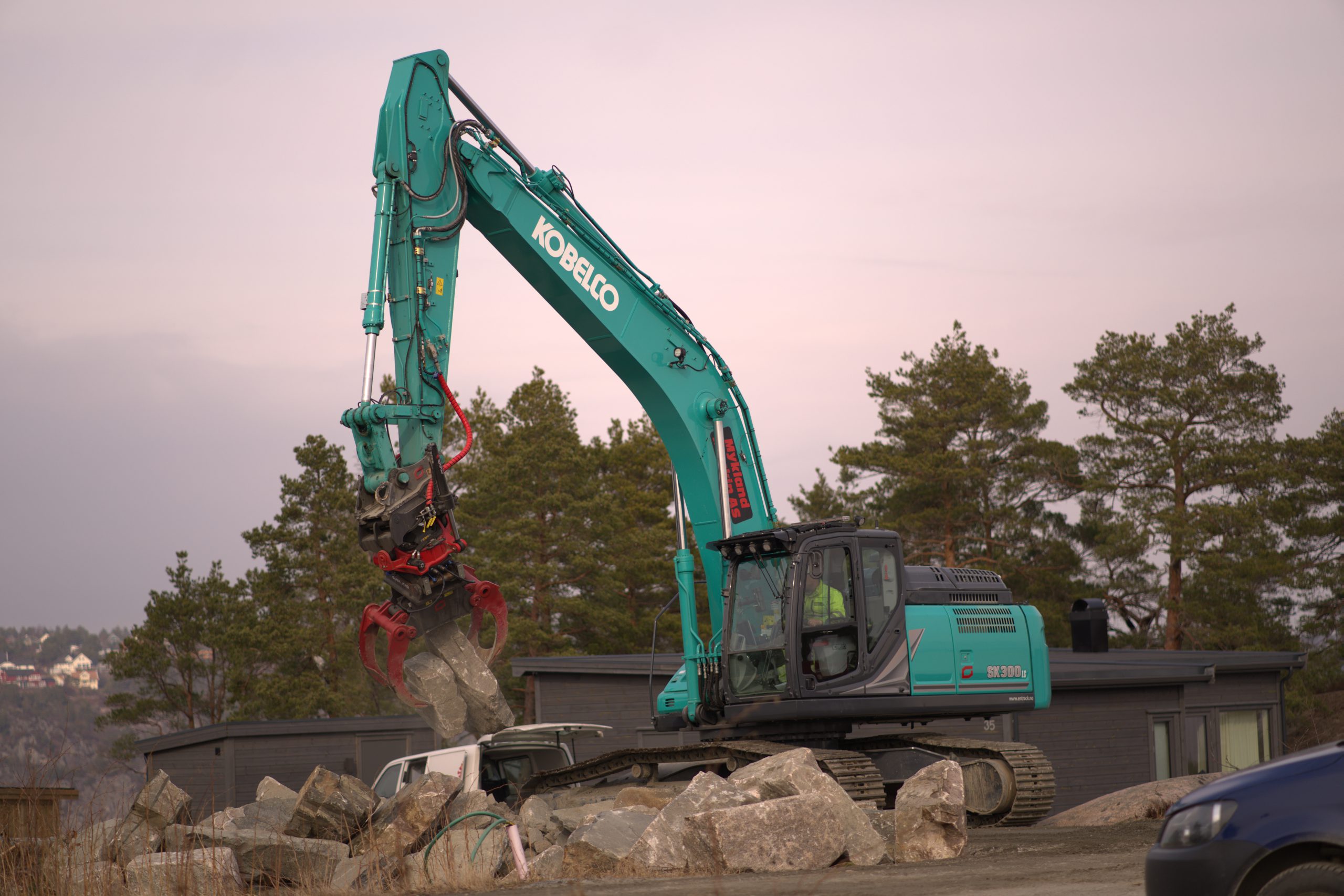